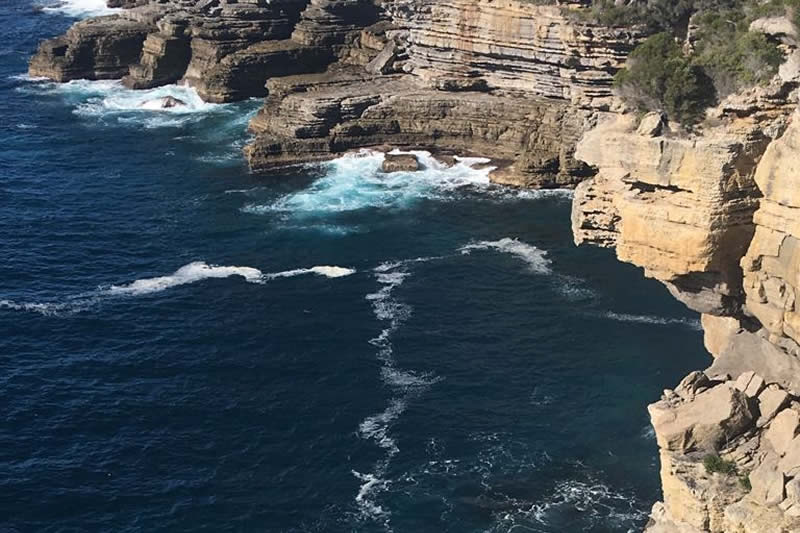 Rock shelves, caves, and middens tell us that the Beecroft Peninsula and Currarong have been inhabited by aboriginal communities from 4000 and perhaps up to 7000 years ago. The area is very important to the local Jerrinja and Wreck Bay Aboriginal communities.

In the late 1830s Alexander Kinghorne and his sons tried to establish grazing and farming on his estate called Mount Jervis. The estate spread from Cabbage Tree on Jervis Bay to Kinghorne Point on the Pacific Ocean. Sailors and fishermen often sheltered in the safe haven of Abraham’s Bosom.

The first land grant at Currarong was 34 acres in 1858 to Helen Jane Mackay, daughter of the first Crown Lands commissioner in Nowra. It covered approximately the area between Walton Way, Piscator Avenue, Fishery Road and Merimbula Street. This was bought by Henry F Halloran in1928 and became the Halloran Subdivision in 1930.

From the 1880s part of Beecroft Peninsula has been used by the Royal Australian Navy for bombing and offshore to onshore target practice. In 1955 shells from the Black Prince, a New Zealand ship doing exercises with the RAN, came a little too close, landing in the village and off Currarong Creek. The area is now known as the Beecroft Weapons Range.

In 1898 because of the many shipwrecks and the wrongly placed Cape St Georges Lighthouse, Point Perpendicular Lighthouse was built. 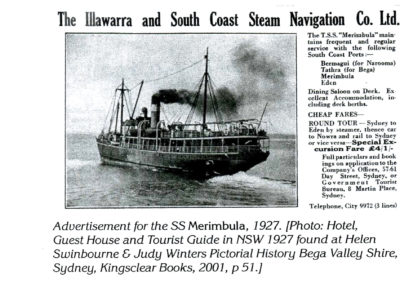 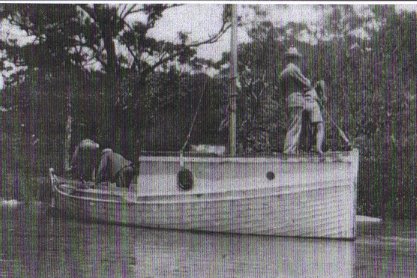 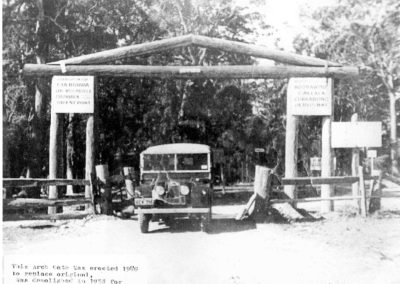 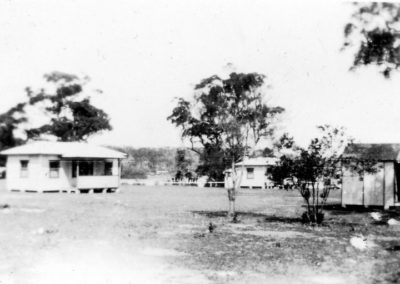 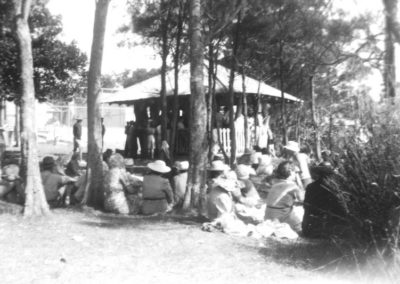 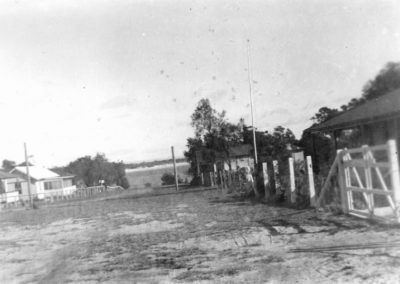 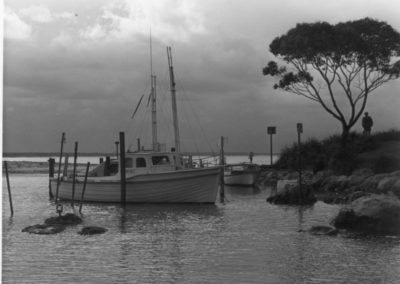 The Plutus in Currarong Creek 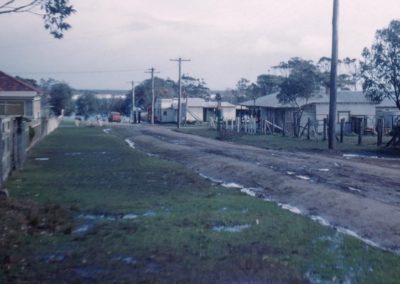 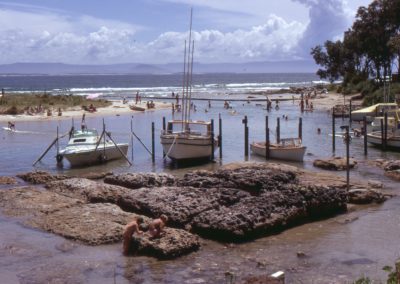 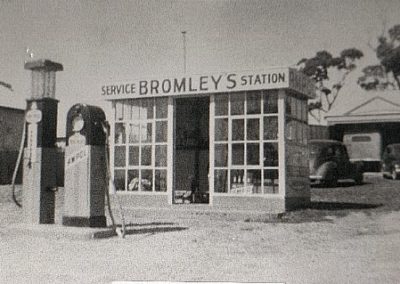 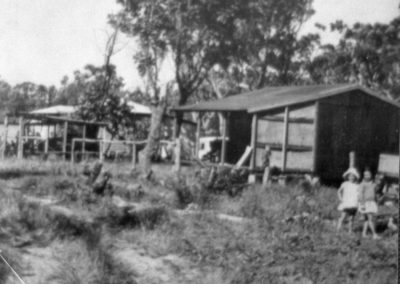 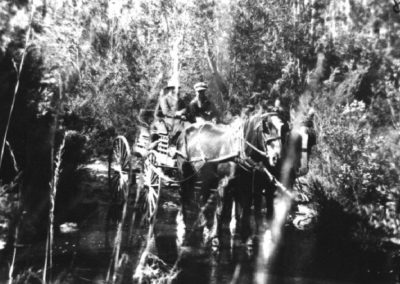 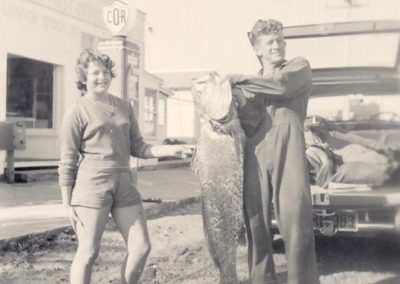 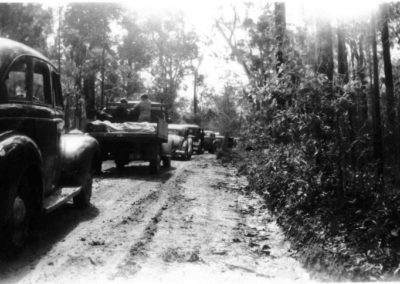 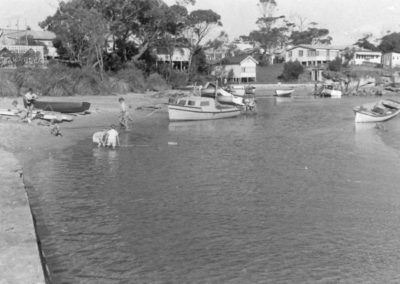 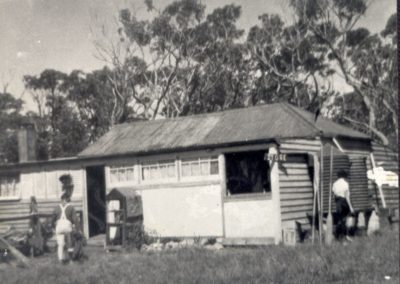 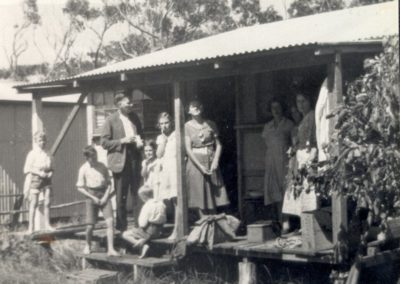 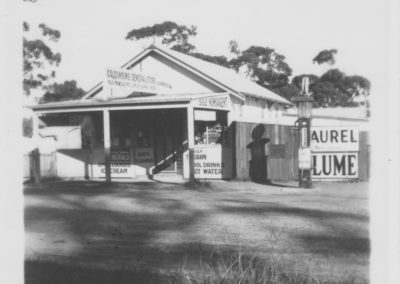 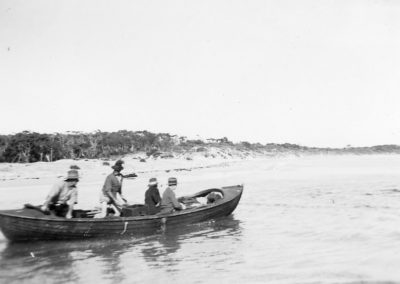 The first person thought to have settled in Currarong was Alex Carvis in the 1890s. Initially a gum getter collecting gum from grass trees, he built a hut and took campers fishing in small boats and from the cliffs. He also planted the Moreton Bay Fig growing near the rotunda.

A little later the Hammer brothers built a shack and started commercial fishing from Currarong taking their catches up the Shoalhaven River to Bomaderry railway station and on to Sydney. Currarong slowly became known as a magnificent fishing and camping spot for people from Sydney, Wollongong and the Shoalhaven area. They came in boats from Greenwell Point or overland by horse and cart on dirt roads and along the beach. They stayed in makeshift tents and huts. They roamed the headland enjoying places like Drum and Drumsticks and Cabbage Tree. They left with huge catches of fish and amazing stories about Currarong and Abraham’s Bosom Beach. 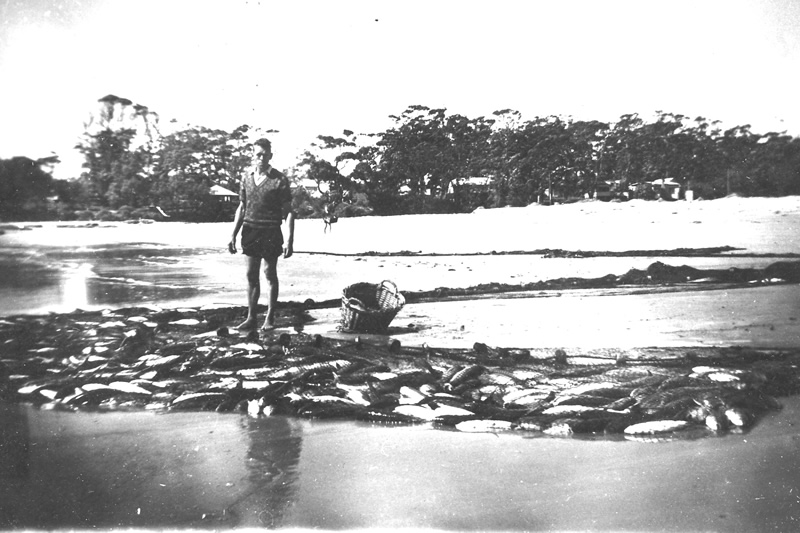 In 1882 the steamship Plutus ran aground on Warrain Beach. The wreck is underwater about 300 metres west of Plutus Reef. Coal from the ship can still be found on the beach.

In 1928 the wreck of the Merimbula on Whale Point created a long-term tourist attraction and brought more visitors to Currarong as well as lots of salvaged building materials and tinned food supplies. Bill Lennox was appointed caretaker of the wreck. 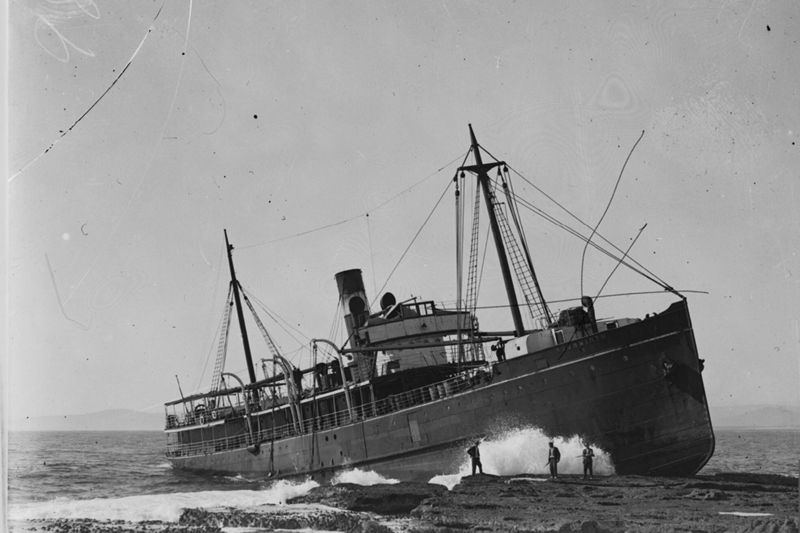 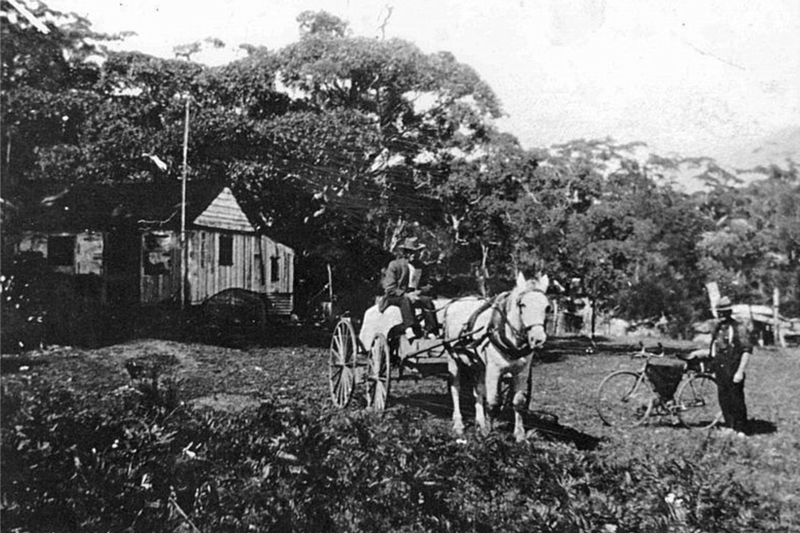 In the 1920s and 1930s more fishermen and families moved to Currarong, buying into the Halloran subdivision or obtained Crown Land permissive occupancy leases. Many boats were moored in the creek and opposite the current boat ramp. The Moore family started to build holiday cabins and later the original part of what is now Zac’s Café and General Store. They also looked after the camping ground on Dolphin Reserve. The Lamonds, the first family with children, settled in 1931 and provided milk and vegetables to visitors and a mail delivery service from Nowra. The Peel family opened Currarong’s first store and post office on Warrain Crescent. The Bromleys had a store, petrol pump and holiday cabins in Walton Way and later provided a bus service to Bomaderry station. The Colquhouns, Coultharts, Chamberlains, Campbells, Elliotts, Mackens, Blaxells, McEwans and Webers were just a few of the families who built stores, weekenders or permanent homes in the 1940s, 50s and 60s. Many of the houses in Currarong are still owned by relatives of these families.

In 1945 Abraham’s Bosom Reserve was established. Between 1947 and 1953 the Progress Association was established and the Progress Hall built. About this time the Camping Grounds moved from Dolphin Reserve to its present location on Nowra Road. From 1965 to 1968 Currarong Bowling and Recreational Club was planned and built.

Currarong’s reputation as a magnificent fishing, camping and holiday destination continued to grow. The village acquired more services- electricity, picture theatre, tennis courts, septic tanks, sealed roads, town water, more shops and finally sewerage. The Fire Shed on Walton Way was replaced by the Fire Station on Fishery Road and became the Arts and Crafts Workshop. The Club was extended and the Progress Hall refurbished. The road through the Caravan Park was diverted. Beach Mission was held during the Christmas holidays. 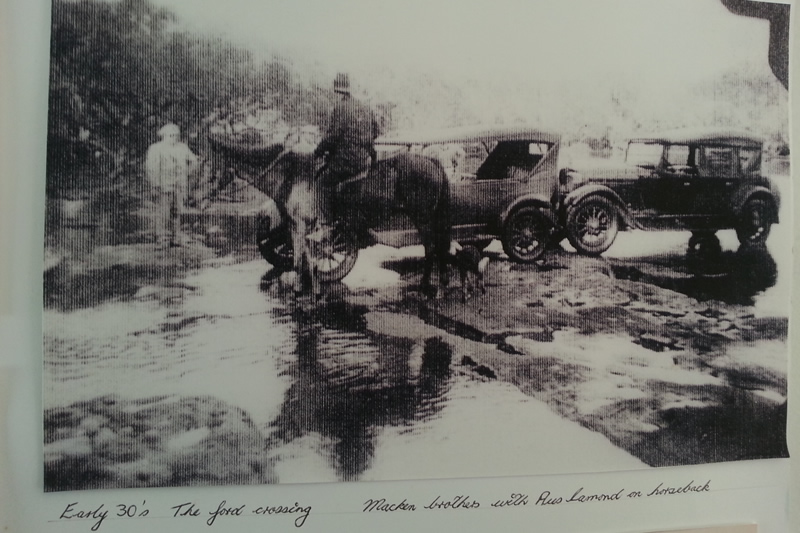 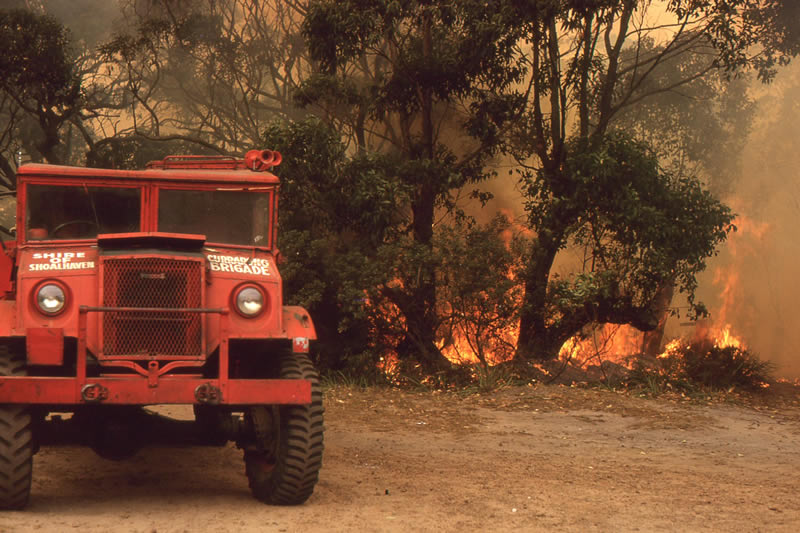 Bushfires burned 13 houses and buildings and much of the bushland.

Currarong connected to the sewer. Renovating and rebuilding boom started.

Bushfires burnt out much of Beecroft Peninsula.

An East Coast low with high winds and huge waves damaged all the dunes on Bosom and Warrain Beaches and threatened waterside homes.

Become a member or hire our hall today!